In 2005, when the New York City Ballet first performed Jerome Robbins’ 1958 NY Export: Opus Jazz, the urban verve of its choreography fascinated soloists Ellen Bar and Sean Suozzi as young New Yorkers. They determined to film this rarely performed dance, not only to bring its jazzy movement to a wider audience, but also to explore the significance of that “NY” in its title. Directed by Henry Joost and Jody Lee Lipes, their vision of Robbins’ “ballet in sneakers,” a forty-six-minute film also called NY Export: Opus Jazz, is now available on DVD (Factory 25, FTF-015, $24.95), after its broadcast showing on PBS in March 2010.

Two decisions make the film remarkable. First, Bar and Suozzi have produced a truly New York dance movie, setting the ballet’s five movements in a variety of city locations: three in Brooklyn – the empty McCarren Park Pool in Williamsburg for the opening “Entrance,” the half-finished Imlay Building in Red Hook for “Statics,” and a school gym in Carroll Gardens for “Improvisations” – and one in Man­hattan, the old High Line for the pas de deux, “Passage for Two.” The film cheats, but not seriously, by placing the finale, “Theme, Variations, and Fugue,” across the Hudson in Jersey City’s Loew’s Theater.

Equally important, the directors decided with Bar and Suozzi to create a film rather than simply record a ballet. In so doing, Joost and Lipes violate virtually every convention of filmed dance going back to Fred Astaire’s insistence that the camera serve the choreography by displaying the performance unostentatiously in what appears to be a single take. Here the camera whirls, swoops, rises, sinks, tracks, and dollies, producing a dazzling variety of shots, edited together in an expressive combination of swift and languorous visual rhythms.

In “Entrance,” a tight closeup on Amanda Hankes’ hand starts the ballet’s opening ritual of several dancers slapping the concrete floor of the empty pool, then lifting their hands airily. We soon see the ensemble of twelve head-on in ranks of three, swaying alternately left and right, snapping fingers; closeups, like that of Ashley Laracey’s orange sneakers heel-and-toeing on the concrete, reinforce the real-world settings, as do long shots of the group in canon, flinging their limbs to the corners of the zodiac.

Busby Berkeley–style overhead crane shots show compositions evolving, as in the ending of “Entrance,” where the dancers swoon backward to the ground like the spokes of a wheel. Joost and Lipes can keep cool as well: when the men and women form two lines and couples take turns sashaying down the hall, the camera stops to watch the whole ensemble revolving clockwise like a compass needle.

This visual virtuosity succeeds so well partly because of the peculiar nature of NY Export; similar treatment for Dances at a Gathering, say, would invite disaster. In some ways, the ballet looks better in the movie than onstage. Bar has said the original Florence Klotz costumes and Ben Shahn sets, though handsome, turn the ballet into a period piece, but both Robbins’ choreography and Robert Prince’s score, jazzy without jazz’s spontaneity, hardly seem timeless, and the camera’s visual play helps to modernize the work. The costumes assist the updating, the women swapping their Audrey Hepburn boatneck jerseys for street­wear to fit the real-life settings – an assortment of tank tops, blouses, and shorts – while the men wear T-shirts or polos, jeans or chinos. 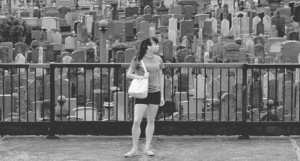 As a result, only one of the dance’s five sections feels like 1958 rather than 2010, the concluding “Theme, Variations, and Fugue,” presented not outdoors, but as a kind of dress rehearsal in an empty theater. The dancers suddenly dress alike – not in theatrical costume, but the youth uniform of white T-shirts and blue jeans. In this section of the ballet especially, Prince’s jaunty syncopation feels trivial and unsophisticated, like a Muzak arrangement of Brubeck, and while Robbins’ choreography uses big, extended gestures for the sixteen dancers, moving in unison and in canon, many of the devices have staled, like the Charles Atlas flexing in the brief duets and the knee-dropping walk for five men. The directors here truly save the show by immersing us, shooting a good part of the finale from inside the movement onstage, catching us up in the speed of the dancers and the novelty of their point of view. 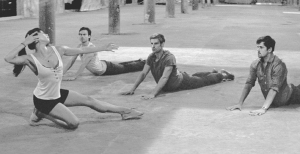 The film’s most exciting section, “Improvisations,” unfolds in a school gym as a dance competition among fifteen dancers. Adam Hendrickson suddenly flings his limbs out and starts a jazzy duet with Tiler Peck, and when the others hoot them down for their suggestive hip thrusts, Rebecca Krohn and Robert Fairchild take over, interrupted in turn by Glenn Keenan, vaulting between them into a brief solo with quick arabesques, only to yield the floor to Andrew Veyette, spinning in a bravura variation that becomes a swift duet with Hankes.

All is swift, all is motion, and when four guys cavort in the middle – Hendrickson, Antonio Carmena, Austin Laurent, and Amar Ramasar – a closeup of their right arms crossing in a pair of handshakes emphasizes their spectrum of contrasting skin tones. Suddenly we understand “Improvisations” as the sunny flip side of West Side Story’s “Dance at the Gym” and the film as a brief in support of New York’s on­going quest for multiethnic harmony. Best of all, after a series of squeaky slides on the balls of their feet, the dancers launch into flying glissades, arms thrust in the air, as an amazing closeup isolates the skittering toes of their sneakers. 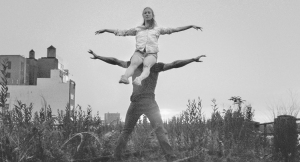 NY Export’s pas de deux, “Passage for Two,” is simultaneously sultry and somber, both intimate and an invasion of privacy. Amid a ballet that bursts all over the stage, the empty pool, and the school gym, the pas unfolds on one spot, which Bar and Suozzi locate smack in the middle of a railroad track on the overgrown High Line, before its renovation into a public park. Craig Hall, face-to-face with Rachel Rutherford, rocks left and right with her, his hand on her hip. He leans forward, ready to devour her, and the camera moves in as he supports her in a series of turns, then pulls back as they separate. He returns, supports her in arabesque, and lifts her high to his shoulder where she extends like a ship’s figurehead as the camera shoots them from beneath; then they squat in an embrace as we soar above them. 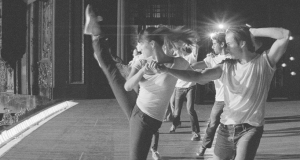 The camera keeps countering them, expressing their tension, swinging right as they move left, left as they move right, then circling them as they intertwine their arms, standing back to back, before Hall leaves Rutherford alone in the weeds and walks off into the sunset. The pas depicts a relationship that, for all its potential, literally goes no­where; the weed-choked track provides the ideal abandoned setting for her abandonment.

The film follows Robbins in having the dancers work up characters, even though NY Export has no narrative, and we glimpse them in a series of interludes between the movements. They appear not as themselves, but as a set of disaffected New York kids. Geor­gina Pazcoguin wades solo under a Coney Island pier, Krohn barely acknowledges an older wom­an in an elevator (Sondra Lee, one of original dancers in Robbins’ Ballets: USA), Gretch­en Smith watches Hendrickson absorbed in a video arcade game rather than her, Craig Hall defaces a railing along an East River walkway, and Robert Fairchild grudgingly fills a kiddie pool for a little girl, then sits and flicks a Zippo. The dance itself doesn’t begin for five minutes, once the ensemble have traveled alone from all points of the city to commune in the dance’s opening rite.

That fictional introductory sequence translates into cinematic terms the ballet’s opening, when the dancers enter one by one and glare at the audience. In a preperformance interview at the Saratoga Performing Arts Center last July, Bar described the beginning of both film and dance as depicting teenaged surliness. Then former NYCB soloist Robert Mai­orano offered some historical perspective. Ballets: USA debuted NY Export in Italy for the first Spoleto Festival of Two Worlds, where those stares represented a defiant challenge that American dance could now rival anything the Old World had to offer, and the crowd’s twenty-minute ovation seemed to vindicate the boast. (The DVD includes an odd 1958 U. S. Information Service film about Robbins and NY Export, as well as Matt Wolf and Anna Farrell’s “making of” documentary short, with several dancers discussing the bal­let then and now; there’s also a brief prose appreciation by John Lithgow.)

Bar and Suozzi’s film doesn’t aim for Ballet: USA’s confrontational power; rather, it offers a cadre of terrific dancers, imaginatively photographed, who give NY Export new clarity and urgency. The opening shots of New York’s skyline, while alluding to the opening credits of the film of West Side Story, resist nostalgia, and a concluding montage of real New Yorkers dancing, playing handball, relaxing in the sun, jumping double dutch, and engaging in other pastimes truly brings the film into the streets, envisioning the city’s utopian potential that Bar and Suozzi have intuited in the ballet. That lyrical closing sequence unfolds to Chopin’s Op. 12 waltz, one more lovely homage to Robbins in this lovely film.